When people are hit by a natural disaster, they often seek comfort from each other. Less well known is that there is a very long tradition of disaster songs: people have often sought support from each other through singing. In her research into the processing of natural disasters in the Netherlands, Lotte Jensen came across songs about fires, floods, drought and insect scourges. She is now working on a CD in collaboration with the Utrecht music society Camerata Trajectina, in which this tradition of the Dutch disaster song is brought to life. Will you help realise this project and make these disaster songs available to everyone? 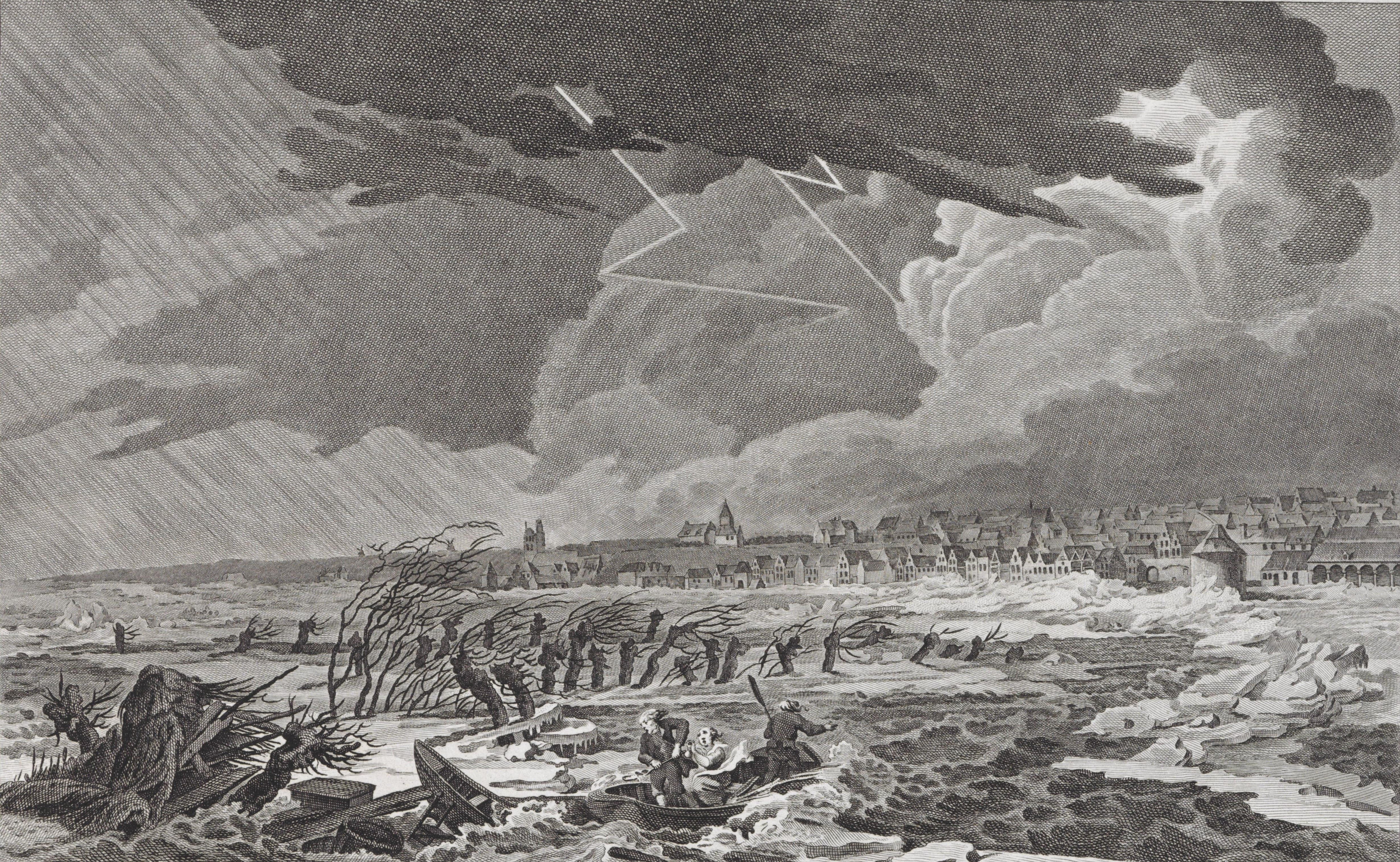 Spectacular details
A selection has been made from a large number of songs from the 17th to the 20th centuries, to be performed by Camerata Trajectina. The selection paints a rich and varied picture of how people used to deal with disaster. The songs are full of emotional proclamations, comforting words and instructive messages. But above all, they are spectacular: in order to hold the attention of the audience, they are teeming with sensational details about what exactly happened. Floating corpses, distraught refugees and miraculous rescues: it’s all there. For example, a five-year-old boy is miraculously saved after a devastating explosion in the city centre of Leiden in 1807. But in a flood song from 1861, a couple see their newborn baby drown in the waves, to their unbridled consternation. The immense grief pours out: ‘t Van een gereeten ouder-hart, Beweent ’t ontroofde kroost, met rood-bekreetene oogen’ (From a broken parent heart, weeping for the stolen suckling, with reddened swollen eyes).

Flood songs
The songs also tell the history of the Netherlands. This is how the battle against water runs through the Netherlands’ musical history: from the St Elizabeth's Flood in 1421 to the catastrophic floods of 1953. The flood song gets a lot of attention on the CD. Moreover, there have been catastrophes that still linger in the collective memory of the Netherlands, such as the Amsterdam Schouwburg fire of 1772 or the Leiden gunpowder catastrophe of 1807. 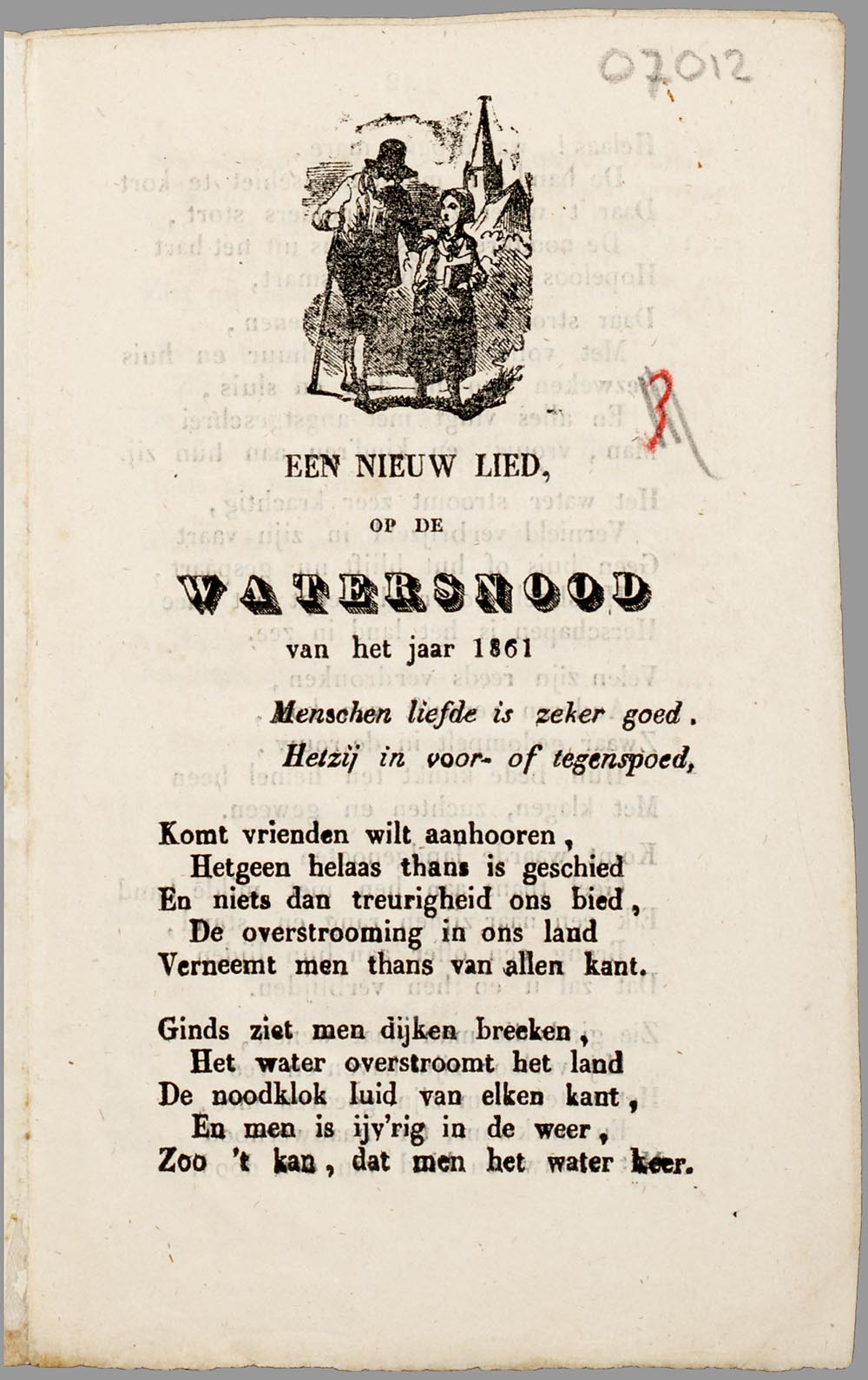 Would you like to help?
Dutch history is brought to life through songs, which will be recorded using professional musicians and released on a CD. We show how they played a major role in coping with disaster. Music offered comfort and solidarity in times of crisis, and still does.
To make this project a reality, € 10,000 is needed. Would you like to help? Then donate via this website. Any amount is welcome. Together, we can bring the tradition of the Dutch disaster song to vivid life.

Want to find out more?
Via the menu, you can read more about the history of the disaster song in the Netherlands, about flood songs in particular, as well as find lyrics and background literature.

Songs about catastrophes have been around for centuries. When floods, fires or insect scourges occurred, travelling minstrels took to the roads to spread the sensational news. But they also wanted to offer their audience a moral lesson.

In earlier times, songs were abundantly sung after catastrophes that had a major impact on a community. The oldest song about a Dutch natural disaster is, as far as we currently know, about severe drought in Brabant and dates from 1611. Unfortunately, no copies of this have survived. Over the course of the seventeenth century, more and more disaster songs appeared that covered various events: for example, a plague of mosquitoes was sung about in Friesland in 1664 and the flood of 1682, which flooded large swathes of Zeeland.

Generally speaking, disaster songs used to fulfil four different functions: they disseminated the news, conveyed a moral message, reinforced the sense of belonging and had an aesthetic function. But, first and foremost, they had an informative function. Singers performed the songs in markets, squares and other public places. This allowed the news could spread quickly and ensured that even illiterate people heard what had happened.
The news in the songs was almost always linked to a message of devotion: people must live more devoutly to prevent God from punishing them with new disasters. For example, a song from 1624 about the breaching of the dike on the Lek near Vianen opened with a just such a God-fearing message:

In addition to spreading news and conveying religious morality, the songs also offered a community an opportunity to collectively mourn and reflect on their loss. Extensive reflection was devoted to harrowing cases and the suffering a catastrophe caused. By singing together – in church congregations and beyond – the sense of togetherness was strengthened: this was a mourning process that everyone went through and that engaged the entire community. At times, the aim was also to raise money for the victims. Charity songs can already be found at the beginning of the nineteenth century, a tradition that lives on to this day. 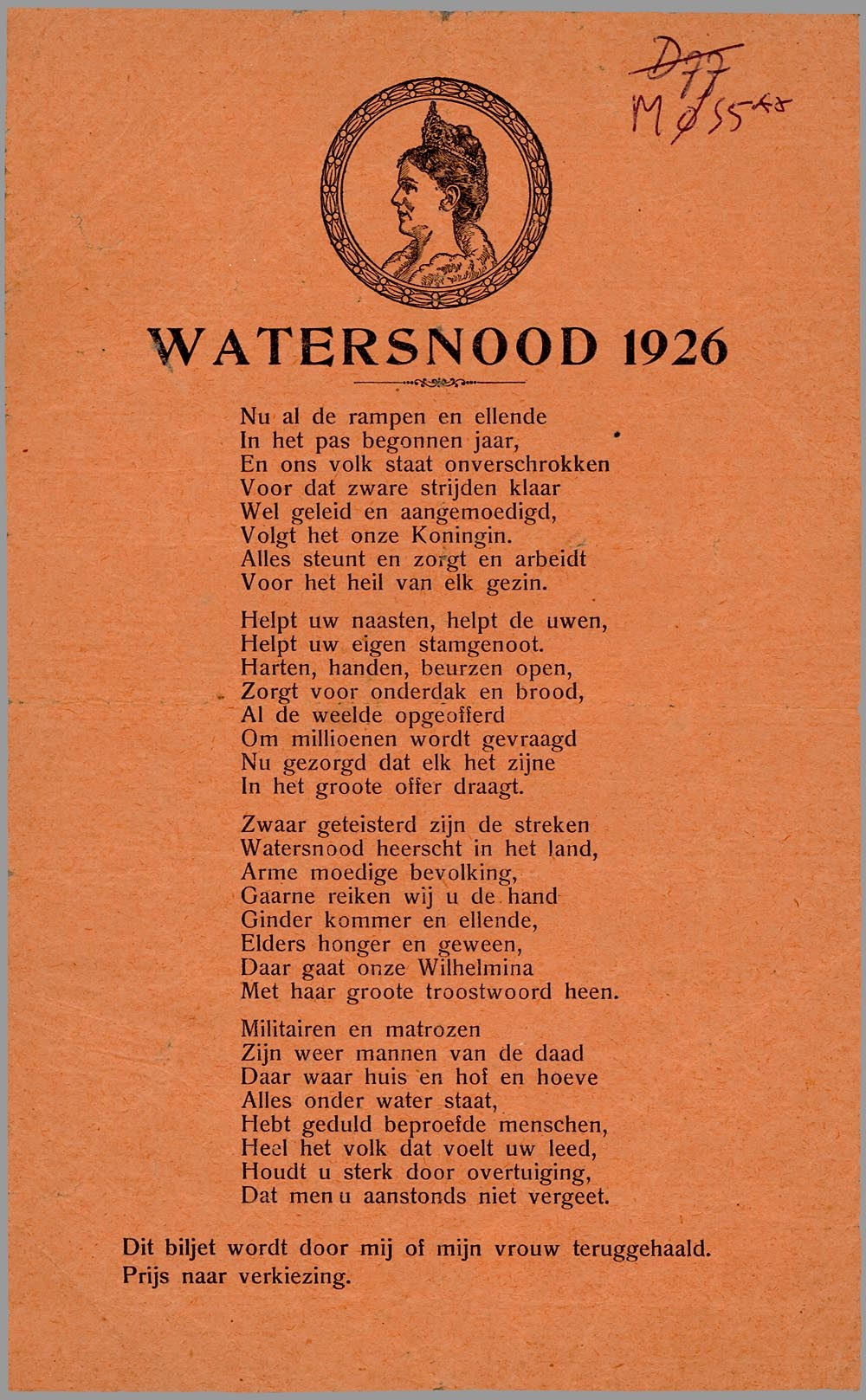 Finally, the songwriters often had the ambition to produce beautiful lyrics to an appropriate melody. Lyricists not only passed on the news, but they did so eloquently, using clever stylistic means. One of the most aesthetic disaster songs is perhaps the tear-jerking song ‘Traanrijk en Troosthart’ (Tearful and Comforting Heart) from 1775 by the pastor Olivier Porjeere. The character Traanrijk reports on the flood disaster of 1775, but in a much more literary way than a newspaper would:

Nowadays songs no longer fulfil a news function in case of disasters, but the collective experience of mourning and creating a sense of belonging still exists. This is particularly evident in charitable calls to action. Just think of all the musical initiatives during the corona crisis.

Dutch history has been characteristically marked by the never-ending struggle against water. For centuries, the Dutch have been collectively striving to control 'the water wolf', efforts which have been rewarded. Think of the Delta Works, also known as a wonder of the modern world.

But it went terribly wrong just as often. Over the course of the centuries, numerous floods have taken place with dramatic consequences for the residents and the surrounding farmland. Think of St. Elisabeth’s flood of 1421, the Christmas flood of 1717, the Zuiderzee flood of 1916 or the disastrous flooding known as the Watersnoodramp of 1953. Songs have been sung about all those events.

The oldest known flood song dates from 1624 and was about a breach of the dike on the river Lek near Vianen. It was written by the Baptist pastor Leenaert Clock, who wanted to impart an edifying message to his congregation. It was his belief that the heavy flood had to be seen as a punishment from God. In the following centuries, many other songs appeared, which often taught religious lessons as well. Some were specifically aimed at an audience of children. A collection of Vaderlandsche gezangen voor de Nederlandse jeugd (National Hymns for Dutch Youth, 1786) was published in which the children learned Dutch history in 26 songs. The St. Elizabeth’s Flood, St. Felix's Flood (1530) and the All Saints' Flood (1570).

One of the most special flood songs is the Watersnood-Wilhelmus from 1881. At that time, a benefit evening was organised for the victims of the flood disaster that had struck Nieuwkuijk in Brabant in December 1880. The song was simultaneously a tribute to King Willem III, who was portrayed as an energetic 'water prince', who was lord and master over the water. 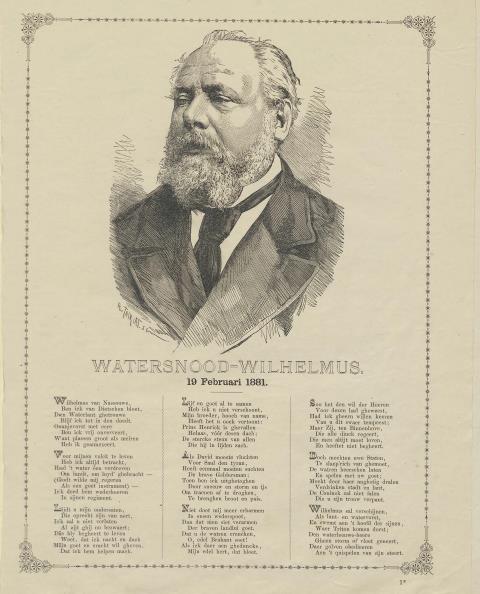 Flood songs still appear today. In 2018, the vocal duo Yentl and de Boer wrote a song about the 1953  Watersnoodramp, in which they included their own family history. Listen to a live performance of the song in the OVT programme, NPO Radio 1, on 29 October 2019.

The disaster songs can be found in the Dutch Song Bank, which contains almost 170,000 songs, from the Middle Ages to the present day. Sometimes a melody is recorded with the songs, but not always. Sometimes there's just a clue, like ‘In a mournful way’. Other times it concerns melodies, which were used more frequently, such as ‘To the tune of Biron’. Using existing melodies for new lyrics is called ‘contrafactum’.

Contrafactum is Camerata Trajectina's speciality. Since its founding in 1974, the ensemble has recorded more than 40 CDs and LPs and has developed great expertise in finding the right melodies for existing lyrics. Thanks to these efforts, the vast corpus of poetry by Bredero, Hooft and Vondel, among others, has been restored to its former glory. Namely by being transformed to song. Their knowledge and experience is essential to bring the disaster songs from research back to life, sometimes after hundreds of years.

Disaster songs were often included in songbooks, in which all manner of other topics were addressed. These were often commercial successes. This applies, for instance, to booklets such as Een nieuwe liedt-boekje (A new song booklet), called the Dubbelt Emausje, which consisted of some new songs (1683), De nieuwe Dirkslandse speel-wagen (The new Dirkland toy cart) (1767) and De Vrolyke schoorsteenveeger (The happy chimney sweeper) (1791).

We encounter a remarkable number of preachers and pastors among the authors. The Haarlem Mennonite pastor Leenaert Clock for example published Het groote liede-boeck (The large songbook) (1625), in which a song about the dam burst on the Lek near Vianen could be found. The Rotterdam preacher Franciscus Ridderus, known for his Huys-gesangen (House songs) (1658), wrote about disasters in an edifying context. Adrianus Mandt worked as a pastor in Gorinchem and wrote a whole series of Boetzangen (Atonement songs) to commemorate the formidable flood year of 1799.

Find out more
Research into natural disasters in the Netherlands: www.dealingwithdisasters.nl 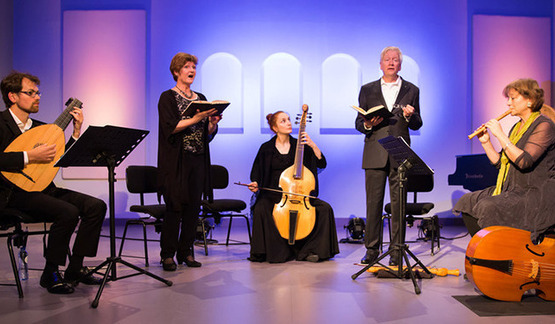 You can put a Donate button on your existing website to receive donations. Visitors can select a donation amount and will be sent to your Kentaa website to complete the transaction.

Simply copy and paste the html code to your website and place it in the <head> section of the website. Or ask your web developer to do this for you.